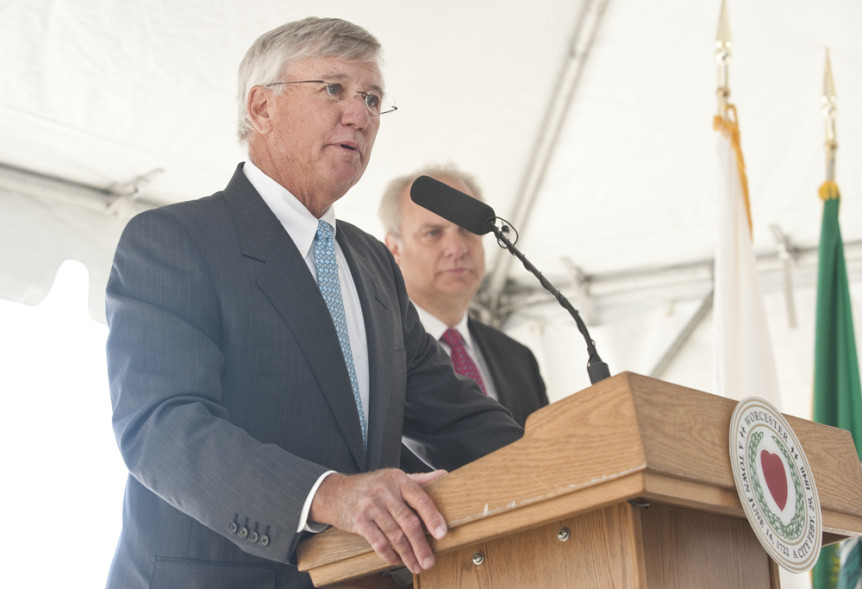 First they built it, now they own it.

A group of carpenters is taking ownership of 100 Front St. as part of a larger, $70.1-million project that will also see UMass Memorial Healthcare send 500 employees downtown in the heart of City Square.

City, state and federal officials, along with project developers, are touting it as one more piece of the puzzle that is rebuilding and re-branding downtown Worcester.

“The Worcester way should be the way the rest of Massachusetts operates,” said Jay Ash, the state’s secretary of Housing and Economic Development. He was among dozens of officials, union representatives, business and local leaders and others at press conference on the plaza behind 100 Front St. Monday, Oct. 26.

The project is a joint venture of Franklin Realty Advisors LLC and Great Point Investors LLC of Boston, with GPI representing the Combined Benefits Funds of the New England Carpenters. It involves office towers at 100 and 120 Front Street, including the building that houses the Telegram & Gazette, as well as property at 2 Mercantile St. and a 1,647-space parking garage. It will include $36 million in upgrades and a new facade around 100 Front St.

In addition, UMass Memorial Health Care is leasing 74,6000 of space, which will house roughly 500 IT employees by the end of 2017. The healthcare provider will also use another 20,000 square feet of space at 90-110 St. as a training center before the end of the year.

“A $70-million investment is a really big deal,” said GPI principal Gary Schwandt, who said, at first, he was not keen on the idea of investing in downtown Worcester.

“My initial reaction to Worcester as a development opportunity was one of skepticism or even worse,” Schwandt, who lives in Boston, said. He said he was working at Connecticut General, “when this loan first went into default in the ’80s.”

His perspective changed, he said, when Franklin Realty manager and owner Chip Norton hosted Schwandt in Worcester earlier this year.

“I began to understand what makes Worcester work,” Schwandt said. “It’s a strong coalition of city and elected officials. It really is a major factor in why I think it’s a good opportunity to invest.”

The news comes as the city readies to open a new, underground parking garage, and with new hotels, including one in City Square and another in Washington Square, expected to be built in or near downtown. Other living spaces have either already been added or are in the works, including the renovation of the Osgood Bradley building behind Union Station into apartments for college students.

The announcement also happens to come about a week before the city’s election. Mayor Joe Petty, who emceed Monday’s press conference, referenced the election by asking whether he could borrow Ash’s comment about the “Worcester way” for his campaign. He also said the project reaffirms the work being done over the past several years.

“It is about all the different parts of the city stepping up to the plate,” Petty said. It’s all about building Worcester together.”

Lt. Gov. Karyn Polito, R-Shrewsbury, was on hand, and touted the $3 million invested in Worcester recently through the MassWorks program. Of that, $1 million went toward the city’s newest parking garage, which will boast about 1,600 parking spaced. Another $2 million is being used to reconstruct Quinsigamond Ave, an entryway into the city off Route 146.

“This is a city prepared for success,” Polito said of Worcester. “[Monday] is one more example of the city getting the job done.”