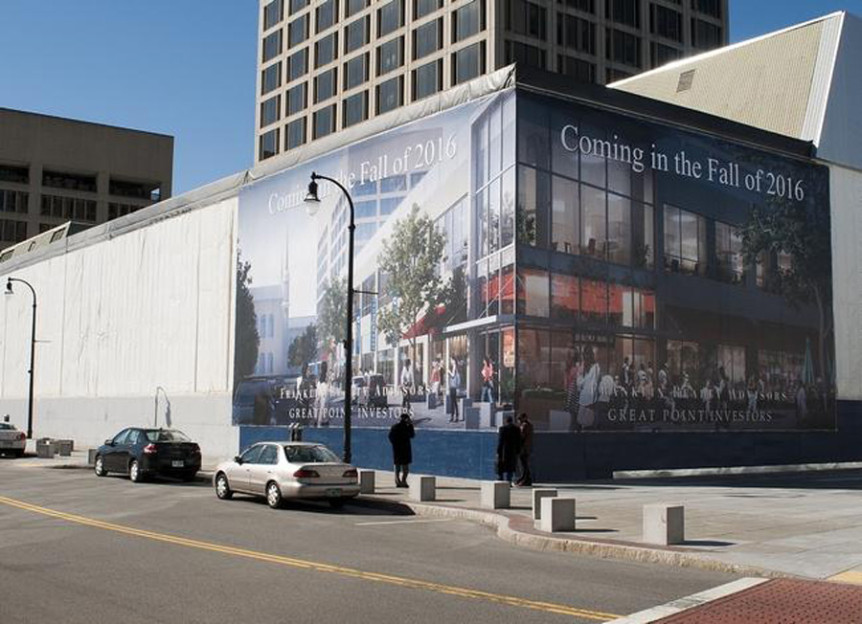 Photo: A banner decorates the corner of a building on Mercantile Street Monday. T&G Staff/Rick Cinclair

WORCESTER – UMass Memorial Health Care announced Monday morning it will be the major new tenant at 90-110 Front St., bringing 500 information technology jobs to downtown, starting by the end of the year.

Franklin Realty Advisors, of Wellesley, and Great Point Investors of Boston recently purchased the buildings at 90-110 and 120 Front Street for $32.5 million, and announced that the entire project cost, including redevelopment of the property, will total $70.1 million.

“A $70 million investment is a really big deal,” said Gary Schwandt, principal of Great Point Investors, at an event held next to the building Monday morning. “This property will be undergoing major changes. It looks like a mall, and that needs to change.”

UMass Memorial Health Care will lease 74,600 square feet of space in the vacant former mall space that faces Front Street. Of the 500 UMass Memorial jobs that will be moved into that space, between 160 and 200 of those will be new jobs, according to a UMass Memorial spokesman.

Dr. Dickson said that having a healthy, vibrant downtown in Worcester is important to UMass Memorial Health Care, the city’s largest employer, with 12,000 employees. UMass Memorial will invest more than $700 million in its information technology department over the next 10 years, he said, as the health provider switches to a new electronic health records provider, Epic; improve its WiFi bandwidth; create a data storage infrastructure; and bring in new software. Other UMass Memorial affiliated hospitals, in Leominster, Clinton and Marlboro, may also have some IT functions served by the relocated IT department.

UMass Memorial will relocate IT staff who are currently spread out in many of the hospital group’s buildings and put them under one roof. UMass Memorial plans to move in to 20,000 square feet of space by the end of the year, and slowly expand to fill the entire space.

Dr. Dickson said one of the challenges of luring top IT talent to UMass Memorial is convincing people to choose Worcester. All of the development happening in downtown Worcester – a luxury hotel, apartments, and renovated office space clustered in and around the CitySquare development – will make Worcester more attractive to potential employees, he said.

If Worcester’s downtown is more vibrant and attractive to young people, “It allows us to recruit a higher quality employee. A vibrant Worcester is good for Worcester, but it is also good for UMass. It helps us attract the type of talent we want to attract,” Dr. Dickson said.

Getting UMass Memorial to commit to lease the space was the key part of the deal for Franklin Realty and Great Point to buy the 10-acre parcel from Berkeley Investments, which owned the property since 2004.

“When we were considering this deal, I said, if we can get UMass, then this deal makes sense,” said Mr. Schwandt, of Great Point Investors. “They will absorb a lot of the vacant space, and made the deal worth doing.”

The project is funded by $46 million in loans from Wells Fargo Bank, and Fidelity Bank, based in Leominster; and a $20 million investment from the pension fund of the New England Council of Carpenters.

Mark Erlich, executive secretary-treasurer for the New England Regional Council of Carpenters, said the union is proud to financially support “a project that will be transformative for the city of Worcester. We are pleased to be putting our money where our mouth is.”

Lt. Gov. Karyn Polito announced at the event that two state infrastructure grants are being awarded to Worcester, although only one is at CitySquare and related to the Front Street project: $2 million for improvements on Quinsigamond Avenue, and $1 million for repairs to the parking garage at CitySquare used by Unum employees.

“Our region is really on the move here,” Mr. Petty said.

“Today is just more evidence the city is moving in the right direction,” Mr. Augustus said.