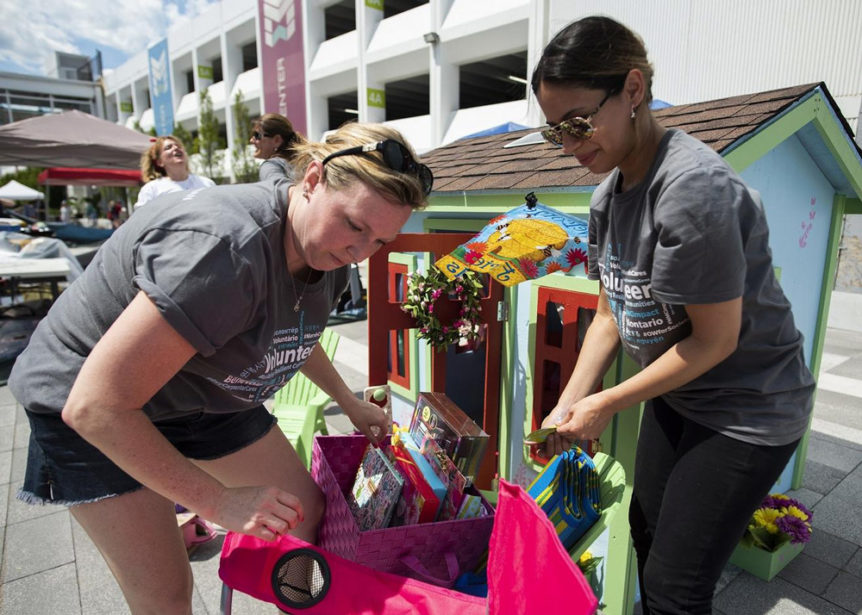 WORCESTER — When 3-year-old Adrianne Casaubon of Leominster saw the playhouse built for her Friday, she rushed inside, shut the door and settled in as if it were her new home.

The 5-foot-tall playhouse, built in the plaza at the Mercantile Center in downtown Worcester, was one of 12 constructed for families with a record of military service. It was part of an initiative by Habitat for Humanity Metrowest-Greater Worcester.

The plaza was taken over first thing Friday morning by amateur builders from local businesses, who constructed the playhouses. Joseph S. Townsend, development director of Habitat for Humanity MetroWest-Greater Worcester, said the project involves dozen of work teams, led by craftsmen experienced in building for Habitat for Humanity.

The walls and other sections of the houses were precut, and the volunteers pieced them together, painted them and added solar panels and lights.

In the afternoon, families showed up and were presented with their finished playhouses.

Adrianne was delighted, and her parents were thrilled.

“This is amazing,” said her father, Matt Casaubon, as he and his wife, Maryellen, watched their daughter inspect every part of the house. “She had no idea,” he said.

The houses were kept secret from the children, but the parents were clued in ahead of time.

Mr. Casaubon served in the Army with the 25th Infantry Division out of Hawaii. He is a recent graduate of Fitchburg State University with a degree in human services and is now in graduate school working on a master’s degree.

Families were presented with their houses one at a time. The reaction of the children was the same. Robert Ushinski, an Air Force veteran of the Korean Conflict, was with his granddaughter River England and his daughter Michelle England. River’s house was built by a team from Bay State Bank. The house was perfect for River, but when Benjy the Dog, Bay State’s mascot, tried to join her, he was too tall.

Mr. Townsend said the event not only creates something special for families of veterans, it helps build communities by giving volunteers a chance to get to know each other and learn new skills. He said he hopes some of the volunteers will take those skills and later volunteer for Habitat for Humanity’s home building, repair or neighborhood improvement programs.

Wendy McFarland, a volunteer from ReMax Professional Associates, said all the members of the REMax team donated time.