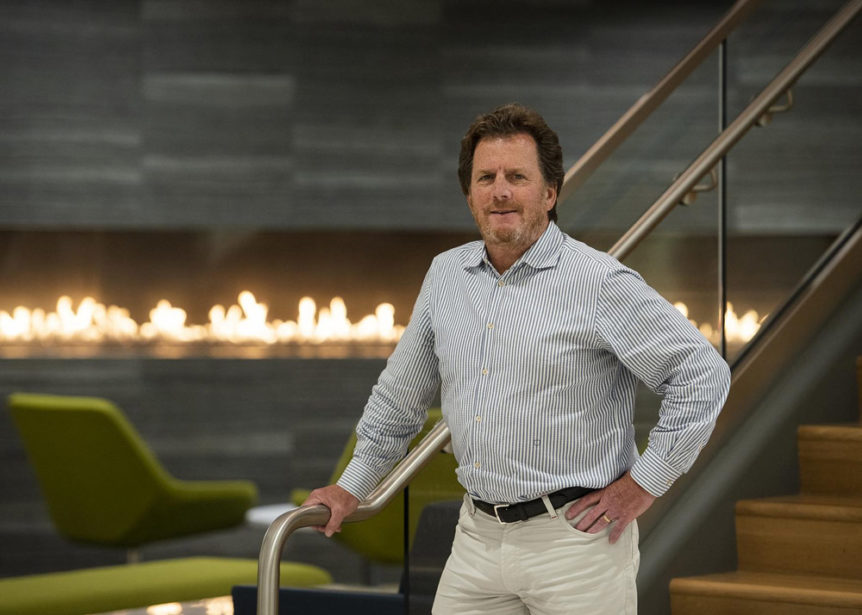 WORCESTER — Chip Norton has real estate development in his blood.

His grandfather worked in it. So did his father. During his summer breaks from college, Mr. Norton toiled on a maintenance crew at the family business’ properties.

But ask him who taught him the most about the business, and the man whose company has redeveloped key portions of downtown Worcester and a former industrial site in Southbridge will tell you he pretty much learned the job by himself.

“I made all the good decisions and bad decisions on my own,” said Mr. Norton, 64, whose company is Franklin Realty Advisors of Wellesley. “I’ve never really worked for anybody, so I’ve learned through default.”

Formally known as Charles F. Norton Jr., Mr. Norton has long been an active developer in the Worcester area. And he has not shied away from difficult investments during difficult economic periods.

When American Optical Co. of Southbridge, long a mainstay of the small town on the Connecticut border, sold its 1.3 million-square-foot property in 1989 for $1.85 million, Mr. Norton was there to help work on redevelopment.

He was part of a group that developed One Chestnut Place in Worcester, a nine-story office building on Elm Street featuring Class A, or the highest quality, space during a 1990-1991 national recession. The project also involved renovating a smaller nearby building, bringing total costs to about $42 million.

In 2008, he was involved in buying a 250,000-square-foot former industrial building at 67 Millbrook St. for $10 million and spending millions more to turn it into modern offices now known as the Worcester Business Center.

Then Mr. Norton leaned into Worcester again, buying two downtown office towers on Front Street in 2015 for $32.5 million after he snagged a large lease with UMass Memorial Health Care’s information technology division. He renamed the 646,500-square-foot complex Mercantile Center, invested about $20 million to update the lobby and other areas, and then refinanced the development to bring in local investors. He also launched events such as beer tastings on the plaza between 100 Front St. and the complex’s parking garage, revving up a dormant space.

His work landed him the 2019 Robert S. Bowditch Economic Development Award, an annual honor recently handed out by the Worcester Business Development Corp.

Raised in Wellesley, Mr. Norton never really intended to work in real estate. He studied communications at the University of New Hampshire because he wanted to own and manage a television or radio station.

First, his grandfather died in 1975. Peter Turchon had founded a pioneering business in 1925 called Homes Inc. that bought, rehabilitated and then sold hundreds of older multi-family homes in Boston, according to an obituary in The Boston Globe.

Then Mr. Norton’s father, Charles F. Norton Sr., who had worked in that business for years and started his own real estate business, died less than a year later.

Mr. Norton helped his mother deal with the estates, which left her with apartments and office buildings. He managed them until about 1980, he said, then started his own business.

He converted Boston row houses to condominiums, and partnered with another developer to convert a church to restaurant and office space. With the rise of historic tax credits, he said, he did deals in Springfield and Worcester.

In the 1980s, Mr. Norton started working with a large national development organization, The Webb Companies of Lexington, Kentucky.

“We became their New England, northeast partner, and that got us into more new construction and bigger deals,” Mr. Norton said.

Together they developed Settler’s Green, a mix of housing, retail space and hotel space in North Conway, New Hampshire. They also developed a 22-story condo building in New York City and an office building in Milwaukee.

The collaboration lasted about five years, according to Mr. Norton. What followed were his own deals, including Chestnut Place in Worcester, which includes more than 200,000 square feet of space, and a Central Massachusetts focus.

“Boston had become kind of a big player market,” Mr. Norton said. “At that point, all the institutional investors were there. All the big national developers were involved, and my choices would have been to partner with a national developer, much like I had with Webb.”

“I was fine doing my own thing,” he said.

Today, Franklin Realty employs about four people at the home office in Wellesley and another 10 to 12 people at the company’s developments in Worcester and Southbridge.

The company’s holding are down to three core properties: the Worcester Business Center, Mercantile Center and the Southbridge hotel, conference and commercial centers.

“I’m really not searching up further development,” Mr. Norton said, sitting in an office at Mercantile Center in Worcester. “I’ve got my hands full between here and Southbridge for the time being, so I’m pretty satisfied with what our inventory looks like and where we are.”

Most of Franklin Realty’s office spaces in Worcester are fully leased. Retail spaces in Mercantile Center have been harder to fill, although coffee house Fuel recently opened at the building at 100 Front St.

“I would hope within the next 60 days we’ll be able to go public on both,” Mr. Norton said.

In Southbridge, about 45 percent of Franklin Realty’s space is occupied, including the hotel and conference center. Mr. Norton is working on that, though.

The federal government had a lease tying up much of the space at the conference center, but was rarely using it, Mr. Norton said, so in 2014 he restructured the deal to make space available to other users and share proceeds with the government.

He’s also hopeful that some of the vacant commercial space could be converted to housing, perhaps with a development partner, or used as cultivation space by a cannabis company now that Southbridge has overturned a ban on recreational marijuana use. The property even has a cogeneration facility to provide power.

“The recreational or adult-use industry is going to be in the market looking for large footprint buildings to grow, and we fit that that market pretty well,” Mr. Norton said.