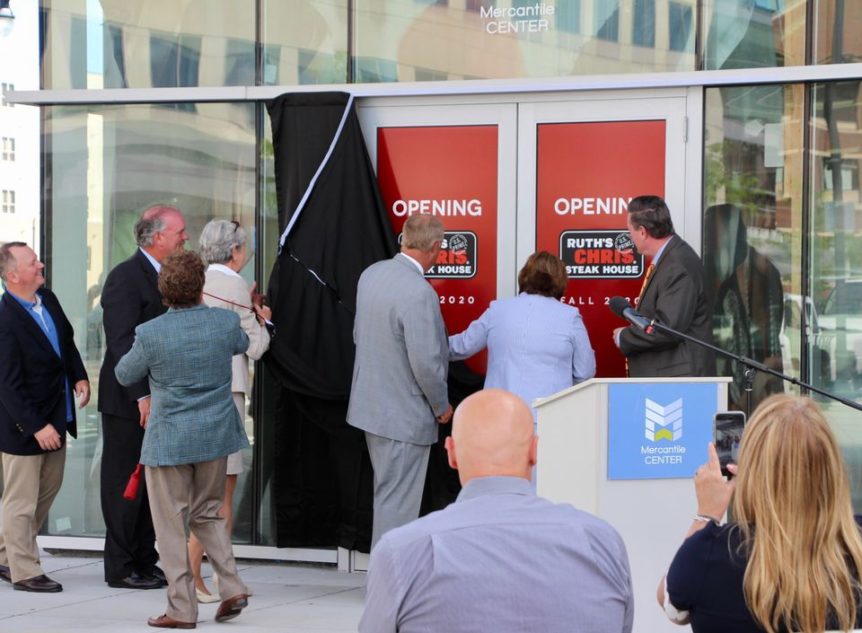 As Worcester officials gathered to announce the upcoming opening of Ruth’s Chris Steak House in Mercantile Center, city leaders remarked on how far the area has come in just a few years.

The nationally-ranked restaurant is expected to open in the downtown space next fall. The upscale, 8,200-square-foot steak house will include 270 seats with an additional 70 seats outdoors.

But just a few years ago, its future home looked completely different.

The area was previously home to the defunct Worcester Galleria mall, which cut through the city center.

“Tearing down the mall and creating pad-ready sites opened up an opportunity for quality developers to implement a new vision, to kind of recreate a downtown that reconnected with our neighborhoods, that built density and mixed-use,” said Timothy Murray, president and CEO of the Worcester Regional Chamber of Commerce.

He said the upcoming opening of Ruth’s Chris is going to help further the momentum that’s already underway.

The steak house, founded in 1965 by Ruth Fertel in New Orleans, Louisiana, now has more than 150 locations across the globe.

The restaurant specializes in fine steaks and chops, which are cooked using a broiling method and served on a 500-degree plate.

“We worked on this project for a couple of years. I think it was obvious from the beginning that our location, our facility, the infrastructure here was a perfect fit for their operation and then it really became an issue of, is Worcester ready for Ruth’s Chris?” Mercantile Center Developer Charles “Chip” Norton Jr. said.

After much research, Ruth’s Chris decided on the space.

Mercantile Center is part of CitySquare, a $565 million multi-phased project in the heart of downtown Worcester and one of the largest public-private development projects in the state outside of the Boston area. The development also includes the AC Hotel by Marriott, the luxury apartments at 145 Front St. and a $35 million, 550 space underground parking garage, among other buildings.

Ruth’s Chris also has locations in Boston and Waltham.

“It says a lot about where we are as a city, and we’re not done yet,” City Manager Edward M. Augustus Jr. said. “There are many more things that are in the works for downtown.”