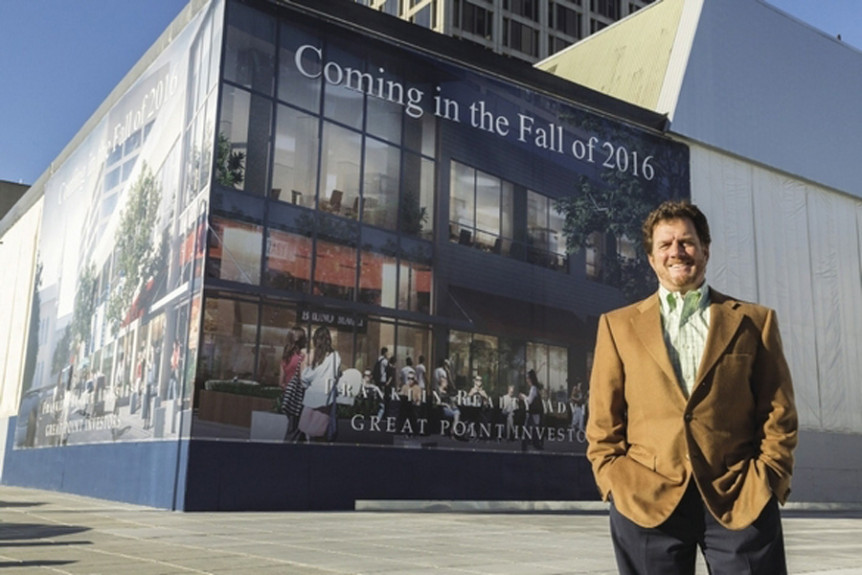 When Chip Norton set out to purchase two office towers in downtown Worcester, he knew modernizing the buildings and the adjoining property that includes a portion of a former mall would be key to the equation.

This $36-million renovation, more than the $32.5 million his company Franklin Realty Advisors and partner Great Point Investors paid for the property, will grow rents for not only these office towers but could kick off a ripple through the city’s office market leading to higher rents and greater value, Norton said.

“We expect to be the premier of other properties downtown and expect the rents will reflect that,” Norton said. “We expect some appreciation like anything else, but where it’s going to end up in the next three or five years is anybody’s guess.”

With rents topping out in the mid to high $20’s per square foot, Worcester sits at a lower end of the Massachusetts market populated with Boston properties that reach the high-$60’s-per-square-foot range and Framingham reaching to roughly $30 per square foot.

With the acquisition by Norton’s company of the towers at 100 and 120 Front St. and other developments such as a high-end hotel near downtown, Worcester could be at the beginning of a rise in the market, said Robert McGuire, senior vice president for real estate firm CBRE New England.

These projects will boost not only rents but possibly push value up enough to attract investors, McGuire said.

The 446 Main St. office tower will likely sell to investors in the next five years on the back of downtown improvements, he said.

“That live, work, play scene is important everywhere … everyone is going to feed off each other,” McGuire said. “You need over two hands to start counting the (developments) that have happened in the last five years.”

Norton is the perfect person to kick off the city’s office space resurgence, McGuire said, having developed properties in the area for the last 20 years, including a complete revamp of the Worcester Business Center.

“He’s a great buyer for those buildings. He gets it. He has been a great investor in Worcester,” McGuire said. “He has a strong reputation, and that is important. He has made big investments in Worcester.”

Norton’s latest investment at Front Street will mean millions in improvements to common space and the creation of ground-floor retail that will elevate the properties.

Renovating properties is a balancing act, said Norton, and one that is especially challenging in Worcester. While construction costs are similar to Boston, Worcester rents can make it more difficult to recoup the costs.

But Norton is out to change that in his building.

“When we add the retail and the correct users that is only going to enhance the marketability of the office space,” Norton said. “One of the major components of our decision besides the quality of the space and the size of it was the parking and the potential for further retail development at the site.”

Improvements will include a ground-floor restaurant to provide the current 1,250 employees in the towers with a quick meal.

The former Bijou Cinema could also see a rebirth, said Norton, who is in talks with those who would like to rekindle that location.

“We would look to bring in a partner or a user that would do that,” he said. “We are thinking there is some opportunity there.”

Much of the redevelopment work in the property is aimed at building upon other efforts to make downtown an 18-hour destination, said Norton

Another key to boosting the properties will be common area improvements, Norton said.

Especially in the current work environment that emphasizes collaboration, it is important to have comfortable common spaces for employees. This is also especially important to tenants, as these common areas and the main lobby serve as the face for the company and are a key recruitment tool.

Other plans include energy efficiency improvements to the property.

While Norton will not do a wholesale reboot of the property as he had with Worcester Business Center where he put on an entirely new façade to the former industrial site, the towers will include eco-friendly improvements where possible, such as the HVAC system.

The age of the building makes improvements such as replacing all the single-pane glass cost prohibitive.

Norton’s plans have already paid off with UMass Memorial Medical Center signing on to bring 500 employees into 75,000 square feet of the 90-110 Front Street property.

While Norton would not talk specifics of rents, he said that part of the attraction of the two towers was the vacant space and ability to bring in new tenants.

McGuire, from CBRE New England, was less coy about the rent potential the improvements carry for Norton’s properties.

“He’s not going to double his rents overnight. I am sure he is going to tick them up deal by deal and continue to push it as he gets a higher occupancy,” he said.

The improvements that Norton makes will have a ripple effect on the value of surrounding office space, McGuire said.

The street-level amenities that will be a part of the property are within minutes of walking and driving to many other office properties, and those properties will ride the rising tide created by Norton’s improvements.

“It’s just going to get better, and it goes in a circumference, and it keeps spreading,” McGuire said. “Other buildings within walking distance will be happy because it will help increase their values too … that will push up the whole market.”

All of this is good for the city.

The announcement of the improvements, which was combined with UMass announcing 500 jobs to come downtown, was attended by officials ranging from U.S. Rep. Jim McGovern and Lt. Gov. Karen Polito in addition to a glut of local officials.

They emphasized that the changes represented by this investment and others into the City Square project serve to grow a city.

“Bringing more people to the downtown area is what this is really about,” Polito said at the announcement. “We are transforming this city block by block.”