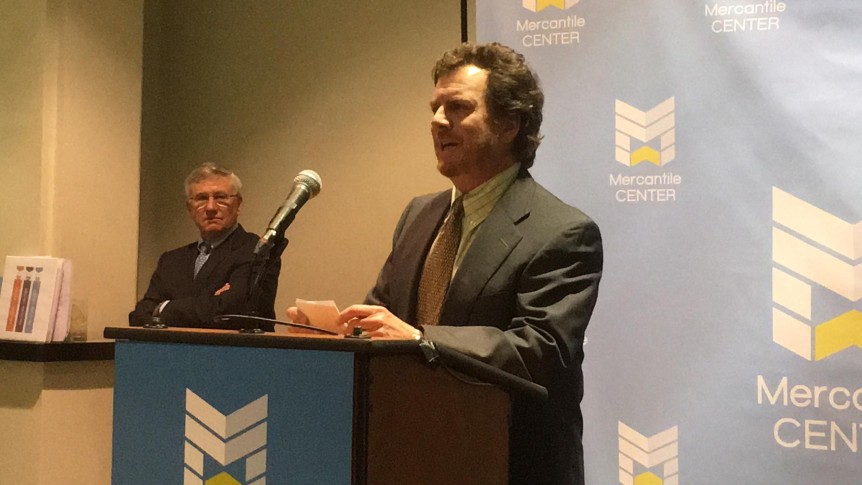 The fact that the name change had already been revealed was a running joke, but the parties involved still managed to conjure up some fanfare for the Mercantile Center, formerly known as 100 Front St. and 120 Front St., buildings that will be a part of the city’s $565 million CitySquare project, at a recent reception at the site.

The New England Carpenters union invested $20 million from its retirement fund in the $70 million acquisition, undertaken by Franklin Realty Advisors LLC and Great Point Investors LLC, and attendees focused on the wide-ranging impact the building would have on the economic success of the city.

“We think of you as our partners in this endeavor,” Gary Schwandt of GPI said to the assembled city officials and community members. “The cooperation in this community between the civic and business community is what makes Worcester so attractive.”

Schwandt called the project a “tipping point” for downtown Worcester. The buildings at 100 and 120 Front St. – which will be combined into one address, 100 Front St., for simplicity – feature more than 600,000 square feet of office and retail space, and the investors are planning major renovations to the facade and interior to make the buildings a premier destination for business.

While Worcester Business Development Corporation president and CEO Craig Blais cautioned that the project was less “Disneyland” and more “a hub of density,” speakers painted a picture of a much-improved downtown area, with office and retail space – UMass Memorial will be moving hundreds of jobs to the building, and the Telegram and Gazette has its offices in the space and its name on the building – within walking distance of Union Station on one side and entertainment options near the DCU Center and Main Street on the other.

“We believe this project is going to play a huge role in the future and development of Worcester,” Franklin Realty manager Chip Norton said.

While the next six to nine months will be taken up with renovations and improvements, which will be somewhat disruptive to tenants, civic and business leaders said the big picture would be worth the wait.

“It takes time,” Mayor Joe Petty said, calling for people to stay positive and not get mired in negativity. “And we’re really thriving here.”